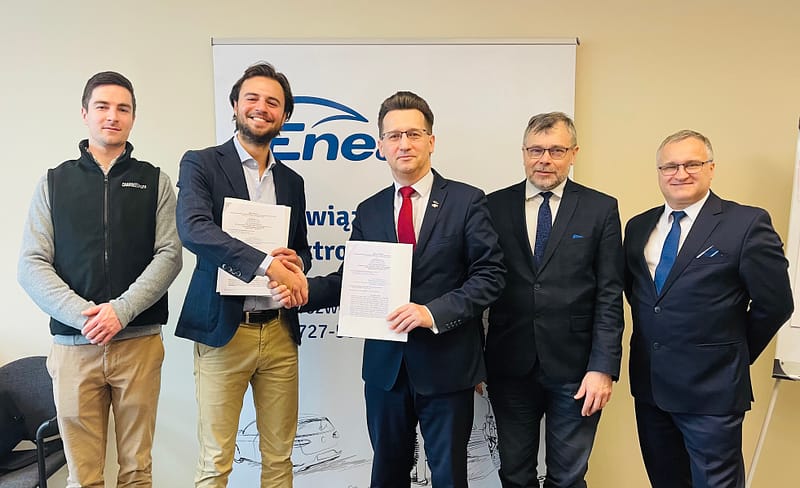 POZNAN, POLAND, February 7th 2023 – ChargeEuropa, a Poland-based CPO focused on urban EV charging announced that it has selected Enea Serwis as the preferred installation partner for growing the ChargeEuropa network across Greater Poland, West Pomerania, Lubusz and Kuyavian-Pomeranian voivodeships. The partnership represents the installation of approximately 200 charging stations in the region within […]

ChargeEuropa pilot network is live in Warsaw together with major brands Poland-based ChargeEuropa claims to have secret sauce for building and operating profitable EV charging networks in cities that are just starting to get in on the electrification game.

POZNAN, POLAND, July 20, 2022 – ChargeEuropa, an EV charging network operator has teamed up with Netflix to promote their summer hit film “Grey Man” alongside the launch of their pilot network in Warsaw. The campaign utilized the full potential of the powerful, interactive DOOH platform to create eye-catching content. ChargeEuropa’s EV charging stations feature […] ChargeEuropa has announced the location of their first EV charger in Croatia. They have partnered with the municipality of Velika Gorica, 5 km outside of Zagreb, to install a dual 22 kW AC charger for public use. The number of EV’s on Croatia’s roads is relatively low, but this is forecasted to increase quickly. As […]

Canard and Vireo Ventures to support ChargeEuropa for Poland deployment

The round was led by US-based Canard Ventures, an early-stage venture capital firm with a focus on technologies and business models that are shaping the creative industry. Other notable investors include Vireo Ventures, Jan-Christoph Rickers and Sam Baker, co-founder of Wunder Mobility. ChargeEuropa builds and installs EV chargers in cities and provides the power for […]

How much should you pay to charge your EV? According to ChargePolska, nothing

If you want to buy an EV in Poland in order to save money on fuel, think again. Almost all of the EV charging network operators require drivers to pay for access to their public chargers. This year Innogy, PGE, Orlen and Energa plan to introduce new pricing policies as a result of growing energy […]